As an exercise, I compared the number of Farrell variants in the FTDNA database with the numbers in our project ... and boy was I in for a shock. There are 105 Farrell's in the database but only 26 of them are in the Farrell project!

Even if we assume half of these (237) are women (and therefore will not have Y-DNA data) and half of the remainder (119) have done some test other than the Y-DNA test, that only brings the percentage up to 55%. In other words, there are probably a lot of Farrell's out there who have Y-DNA results but have not yet joined the project. This could be an opportunity to boost membership of the project. 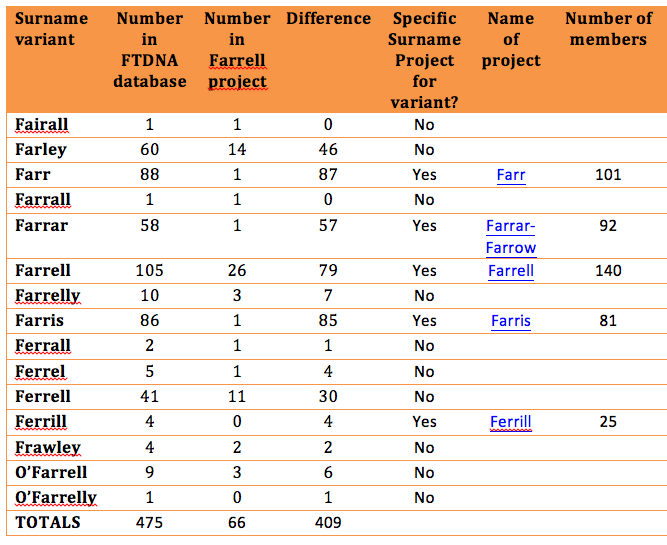 And what would happen if we did boost membership? Supposing we were able to recruit (in total) one third of all the close Farrell variants into the project? That would be (say) 35 out of the 105 Farrell's (an increase of 9 people), 20 of the 60 Farley's (up by 6), and 14 of the 41 Ferrell's (up by 3) - a total increase of 18 members. And if we added in the more distant Farrell variants (Farr, Farrar, Farris), we could potentially boost recruitment from 66 to 158 - an increase of 92 members.

And what immediate effect would that have on the project? It would increase the number of people matching with genetic cousins and would move more people out of the large Ungrouped category and into specific genetic families! This effect was observed by James Irvine in his Clan Irwin DNA Study. The more people who joined the project, the smaller the percentage of members who remained as ungrouped singletons.

I already sent a bulk email to these non-project Farrell's in February this year and this had the effect of gaining an additional 12 members for the project. And what were the consequences of that?


So how do we get more of these Lost Farrell's into the project? I'm glad you asked because this is where you as Project Members come in!

You may have some of these Lost Farrell's among your matches. So the first thing to do is to look among your matches and see if your close Farrell matches are already in the project. You can identify them by their Most Distant Known Ancestor. If you can't find them, email them, ask them if they are in the project, and if they are not, they can join by simply clicking on the JOIN button on the right in the photo at this link - https://www.familytreedna.com/groups/farrell-dna-project/about/background.

Tell them it's free to join and joining will help everyone with their genealogical research.

Any help with this is greatly appreciated!

In upcoming blog posts, we will be moving away from the genetic side and moving more toward the traditional paper genealogy side. We will begin by looking at each of the genetic families in turn and take a close look at what we know about each family, from a genetic perspective and from a traditional genealogical perspective.


Posted by Maurice Gleeson at 01:02 No comments: