A new project member (FJF-4599) joined the Farrell Project in June this year and was a close-ish match (GD 4/37) to one of our Ungrouped members (JF-6813). So I tentatively placed them together into an entirely new genetic family, named R1b-GF7. Both of them have the surname Farrell and their respective earliest ancestors are from Wicklow and Londonderry.

The Wicklow Farrell recently upgraded his Y-DNA test to 67 markers and this revealed no close matches in the project, at this level. It would be necessary for the Londonderry Farrell to upgrade to 67 markers in order to see if the Y-DNA match between the two of them is maintained or lost.

However, in the process of reviewing these new results, it became apparent that the Londonderry Farrell has rare marker values for the markers DYS385a & b (the 5th & 6th markers in the string of results).  His values are 10 & 12 and these only occur in 3% and 2% of Haplogroup R1b individuals respectively. The chances of them occurring together are therefore somewhere in the region of 0.06% or 1 in 1667. So these rare marker values, coupled with the surname Farrell, could identify other members of this particular group.

And indeed there is one other member in the Ungrouped section who meets this profile. He is a Ferrell with ancestry from England, and although he has only tested to the 12-marker level, his rare marker values in combination with his surname is sufficient evidence to warrant his inclusion in this group. He only has the one match at 12 markers (the Londonderry Farrell) so there are no more clues from his limited Y-DNA results.

However, the Wicklow Farrell (FJF-4599) has 14 matches at 67 markers, 28 matches at 37 markers, and 145 matches at 25 markers. There are strong associations with the surnames McCarthy and Longacre, and with the SNP markers S15280 and BY4065, and some evidence of links to Scandinavia and Holland (as well as Ireland). He has already tested positive for the SNP marker Z253, which lies upstream of the markers S15280 and BY4065, and reviewing his Matches' Terminal SNPs, it looks likely that his Estimated SNP Progression is:

On the Big Tree, you can see that this places this group either on a predominantly Irish branch (below S15280) or on a "Scandinavian" branch (below Z18132). The dates for the branching points on this portion of the tree (from YFULL) are as follows: 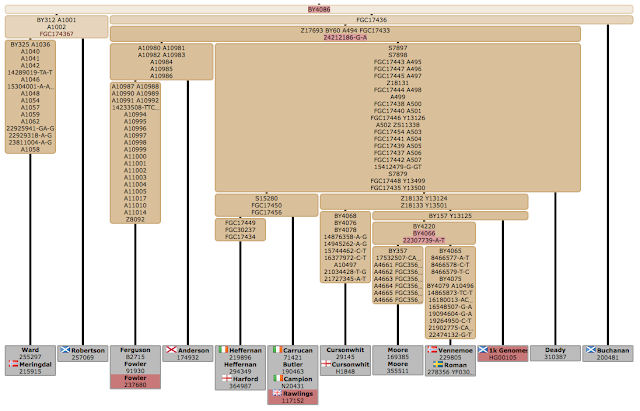 I asked Sam Hanna, long-term Farrell researcher and historian, for his thoughts on the possible connections between the group members and here is what he says:

The creation of a new genetic family, R1b-GF7, is very interesting. One member has a most distant ancestor from Castledawson, south Derry, and another from Aghowle in Wicklow.

Obviously, conclusions based upon one link such as this must be treated with extreme caution, however, this result may ultimately point to the origin(s) of at least one branch of Ulster Farrells.

In 1639 a Patrick Farrell of Magherafelt, south Derry, was associated with the Honourable Irish Society. The Irish Society oversaw the plantation of Derry, and Farrells of plantation origin have been domiciled in south Derry and southeast Tyrone ever since. This is evidenced in various 18th century records and the Griffth’s Valuation of c.1860. For example, a Thomas Farrell was known at Ardboe in 1796.

This ‘Farrell Plantation Cluster’ is by no means unique in Ulster, with the largest concentration in south Donegal dating to the 1630’s. However, as yet there are no historic records which confirm links between the various clusters; and so far there is insufficient genetic data to compare clusters.

There was significant Farrell settlement in Wicklow from at least the end of the 16th century. Therefore, the discovery of a genetic link between south Derry and Wicklow may ultimately assist the search for the origin(s) of at least one branch of the Ulster Farrells.

At this stage, this grouping remains tentative and we need to confirm that these 3 Farrell's are indeed related to each other. We also need to explore the Irish vs Scandinavian connection and to this end further SNP testing is recommended.

So the next steps would be as follows:

It will be interesting to see where this new group takes us.

Update 23 Aug 2016
The Londonderry Farrell (JF-6813) upgraded to 67 markers and the results show 8 matches at this level, 2 of them called McCarthy. He has a GD of 6/67 to the Wicklow Farrell (FJF-4599) and the same SNP markers are present as described above. This means that the Estimated SNP Progression for this group remains as follows: