The Farrell DNA Project currently has 13 distinct genetic groups. Each group consists of people who are close genetic matches to each other and thus probably share a common ancestor some time since the introduction of surnames about 1000 years ago.

The analysis of each group involves getting answers to a series of questions, which may include how old is the group? where is it from? where do the group members sit in relation to each other on the overall "family tree" for this particular group? does this tell us anything about the evolution of the surname and its global spread?

Below is an analysis for Group 4 (R1b-GF4) which attempts to address these questions. Sam Hanna, the newly appointed Co-Administrator of the Farrell DNA Project, is actively working with Group 4 members and exploring their collective genealogical data.

Group 4 in the Farrell DNA Project consists of 14 members currently. There are a variety of surname variants present in this group including Farrell, Ferrell, Ferridge & Farris. This group appears to be genetically related to the 6th group (cyan) in the Farris DNA Project (some of whose members are in both projects). For some of the questions discussed below, the two groups have been amalgamated into one larger group (using the public data available for the Farris group).


Only 1 member of Farrell Group 4 has done Big Y testing (167989). The other members who have done SNP testing have either done a SNP Pack test or simply a single SNP test. These are indicated in the diagram above. This places Group 4 on the Tree of Mankind somewhere below the "major subclade" branch characterised by the SNP marker FGC5494 and (going further downstream) below the sub-branch characterised by BY10339. This particular branch is some 4000 years old so ideally we need at least one more person in this group to do the Big Y test so that further "downstream SNPs" that characterise this group can be identified.

Also, all members should send their Big Y data to Alex Williamson so that they can have additional analyses performed (all completely free) and thus be placed accurately on The Big Tree (Haplogroup R of the Tree of Mankind). Instructions for transferring your Big Y data can be found here.

In addition, all the available SNP and STR data from the larger amalgamated group was fed into the SAPP Programme (at http://www.jdvtools.com/SAPP/) and a Mutation History Tree was generated. This represents a "Best Fit" model of the actual family tree for all the members of this group (given the currently available data). It will change (perhaps only slightly) as more members join and as more data becomes available (particularly Y-DNA-111 STR data and Big Y SNP data). Click on the diagram to enlarge it. A pdf version of this tree can be downloaded from this Dropbox link here.

Interestingly, the members of the amalgamated group tend to split into two major branches. The large branch on the left consists mainly of people called Farris (although there is one Ferrell), whilst the large branch on the right consists of a mixture of different variants (Farrell x4, Ferrell x1, Faris x5, Ferriss x1, and Ferridge x2). For ease of reference, let's call the left branch the Farris branch (from Node #32 down) and the right branch the Farrell branch (from Node #48 down).


Has the group been grouped accurately?

The purpose of grouping people (in the Farrell DNA Project at any rate) is to identify people who are closely genetically related to each other and who are likely to have descended from the same common ancestor within the last 1000 years, roughly since the introduction of surnames. The Most Recent Common Ancestor (MRCA) may very well be the person who originated the particular Farrell surname variant carried by the men in the group (or it could be one of his descendants since that time).

In order for the analysis of any group to be accurate, the grouping itself must be accurate. And that means being able to identify any false positives (e.g. Chance Matches due to Convergence that have inadvertently been allowed in to the group) or false negatives (Outliers that are difficult to spot and have been inadvertently left out of the group)?

Grouping is primarily based on Genetic Distance but other factors such as Rare Marker Values or Unique STR Patterns can also be helpful. The other big aid to grouping is SNP Testing (using the Big Y or SNP Packs) or Downstream SNP Prediction (by analysing the terminal SNP of a person's matches). You can learn more about the grouping process in this video of a recent presentation I gave at the FTDNA Annual Conference in Houston (10-12 Nov 2017). These various methods help identify false positives (people who should not be in the group) and false negatives (people who should).

In relation to the amalgamated Group 4 & Farris Group 6, there are several distant matches currently in the larger group and it is questionable whether or not they belong here. They are:


These can be seen to be lying on the outskirts of the Mutation History Tree above. These people should do the Big Y test to clarify their terminal SNP and whether or not they belong in Group 4. Now is the time to buy the Big Y test while it is reduced in cost (now $475) during the Christmas Sale (till Dec 31st) and while further discount vouchers are available to reduce the Sale price to $400 or even $375. FTDNA are also offering a free upgrade to Y-DNA-111 for anyone who buys the Big Y test during the sale.

There are two non-Farrell's in Group 4 (Dearduff, Vance) but their STR marker profile suggests that they are closely related to others in the group, and additional SNP marker testing confirms that they are FGC5494 positive which again suggests they do indeed belong here. In addition, Vance lists his MDKA (Most Distant Known Ancestor) as a Ferrell from Virginia.

There is limited evidence of Convergence in this group. The person closest to the modal haplotype (Ferrell 369768) shows no risk of Convergence at 111 or 67 markers, minimal risk at 37 markers (37 matches in total, but only 1 with a non-consistent terminal SNP - and he has a different surname), and a high risk at 25 markers (3468 matches) but none of these matches bear a Farrell surname variant.

Using the Admin's Genetic Distance tool, there is no evidence that any Ungrouped project members belong in Group 4 (i.e. all members who should be in this group are already in this group). When the member closest to the Group 4 modal haplotype (Ferrell 369768) is compared to all other group members at the 37, 67 & 111 marker level, there is no sign of any "outliers" who could possibly belong in Group 4. Thus we can be reasonably confident that no one has been "left out" by mistake.

How old is the group?

There are various ways that the age of a genetic group can be calculated:


I currently find that the SAPP Programme estimates appear to be the most accurate (but this may change in time). Based on these values, the overall age for the group appears to be about 1000 years old. The MRCA (Most Recent Common Ancestor) is represented by Node #49 in the Mutation History Tree above and the estimated TMRCA (Time to MRCA) is 37 generations (67% range 23-50) which gives an estimated date for this particular branching point as 950 AD (67% range 550 AD to 1300 AD). The date 950 AD is tantalising close to the supposed origin of surnames which makes it look like it could very well be an accurate estimate ... but we all have a natural tendency to pick the number that best suits our preconceived ideas. So a pinch of salt is in order.

Interestingly the TMRCA for the Farris Branch (Node #32 on the left) is 1300 AD, whilst the TMRCA for the Farrell Branch (Node #48, right) is 1650 AD. So the two branches appear to be quite distantly related to each other. It also suggests that there may be a lot more Farrell's and Farris's out there who may be descended from additional "ancient" branches of this genetic group which have yet to be identified. This may become clear as more people join the project.

Where is the group from?

There are several sources of evidence that may help determine the likely ancestral origins for any particular genetic group. These include the following:

Most people in the Farris branch (Node #32 down) have a New World location for their MDKA (Most Distant Known Ancestor) and only one suggests an origin from "Ulster". In contrast, on the Farrell Branch (Node #48 down) most people have an Irish origin (x5), 3 are from the US, and 2 cousins have origins in Berkshire (UK). However, none of the MDKAs go back beyond about 1600 and some of these pedigrees are guesstimates rather than supported by hard documentary evidence, so no firm conclusions can be based on the evidence from MDKAs and pedigrees.

Thus the surname Farrell and its variants is quite ubiquitous. The variants Farris and Ferris could either be of Irish, Scottish or English origin.

Does anyone know if the Farris name appears in ancient genealogies, either Scottish or Irish? If anyone knows of any such data please leave a comment below and I will update the post accordingly with any new discoveries.

Looking at the nearest genetic neighbours to Group 4 in the Big Tree diagram above, it appears that they are Belgian, German & English and the common ancestor was some 4000 years ago. This is too far back to draw any firm conclusions. A lot can happen in 4000 years!

However, The Big Tree is constructed using only SNP data from NGS tests (i.e. Next Generation Sequencing tests, such as the Big Y). It does not use SNP Pack data or data from single SNP tests. Such data may be present in Haplogroup or Geographic Projects (which is why all project members should join these projects), and may give further clues to the nearest genetic neighbours of Group 4.

A trawl of the L21 Project and FGC5494 Project revealed several additional people who were positive for BY10339. Bearing in mind that this is about 4000 years old, these additional genetic neighbours may be very distant and may not therefore be terribly informative. Nevertheless, here are the surnames (and their origins) identified as being BY10339 positive:


Surname Distribution Maps for the various names above are appended below (from www.forebears.co.uk). They are based on the 1881 UK census and the 1901 Irish census.  There is no definitive pattern when taking all these names as a whole, and thus no firm conclusions can be drawn from this exercise. Some maps suggest a Scots-Irish distribution, others Northern England, others the West of Ireland, and some indicate that by 1881/1901 the surname is so ubiquitous in Ireland & Britain that no single origin is suggested. Further downstream SNP testing will be needed to see if we can better define the closest genetic neighbours to Group 4. And earlier Surname Distribution Maps may be helpful.

But for now, there is no clear indication as to the origins of this group.

What are the Next Steps

Those who haven't done so already should follow steps 1-3. Everyone should consider Step 4. 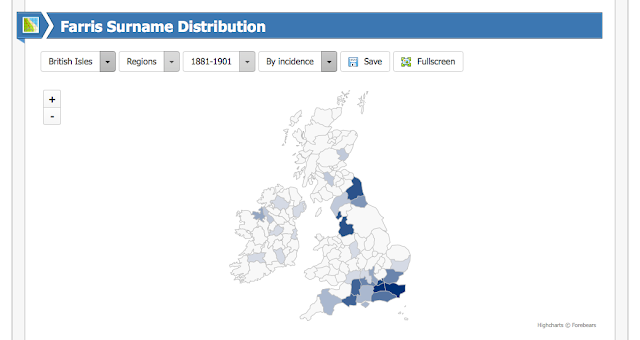 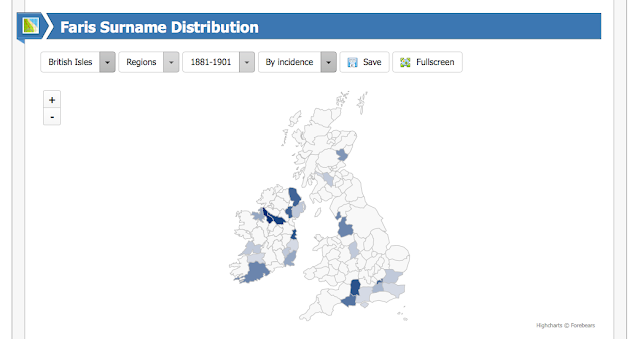 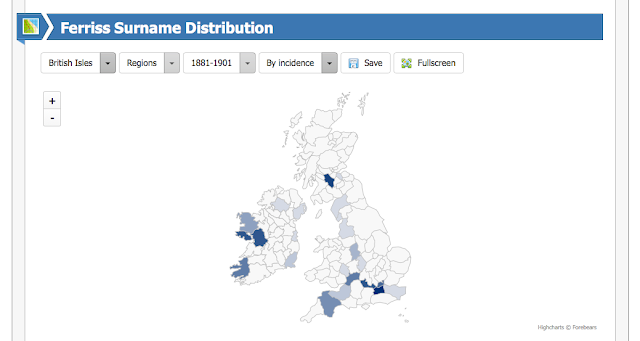 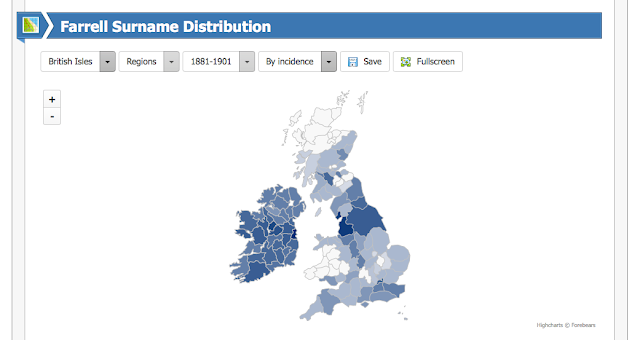 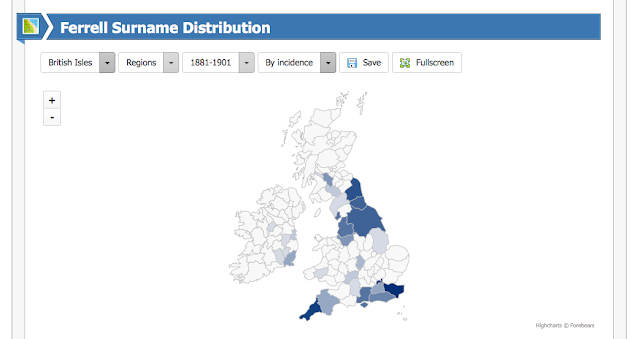 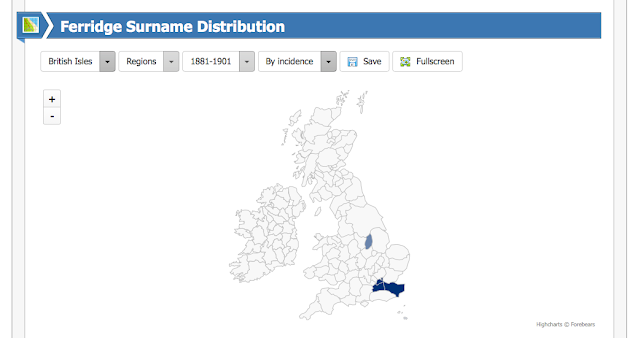 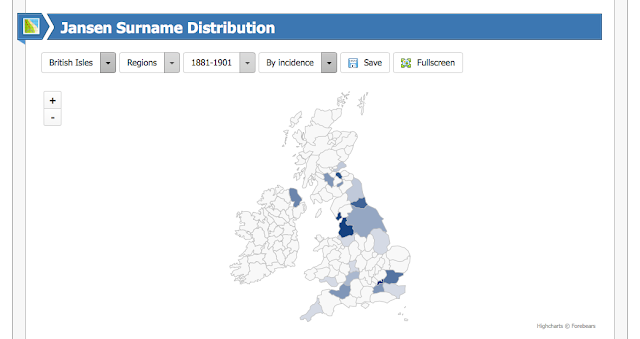 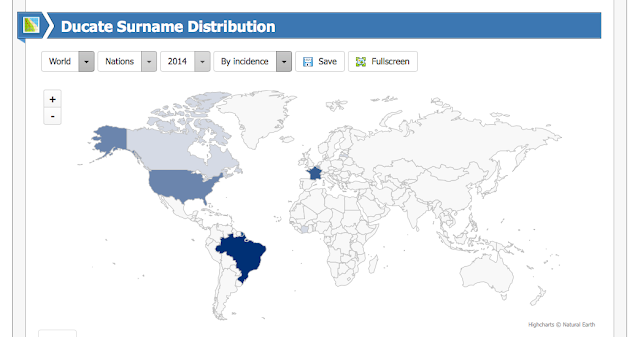 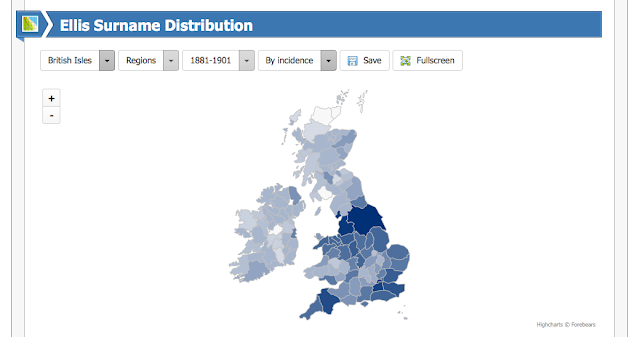 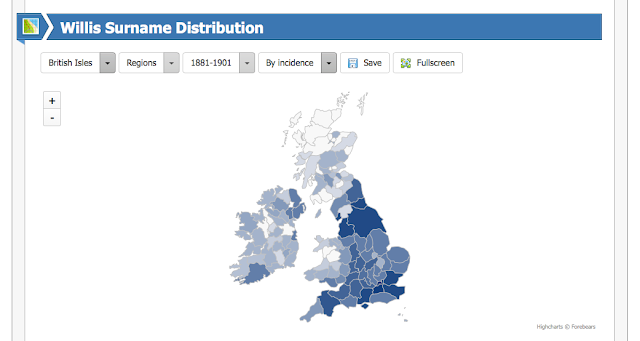 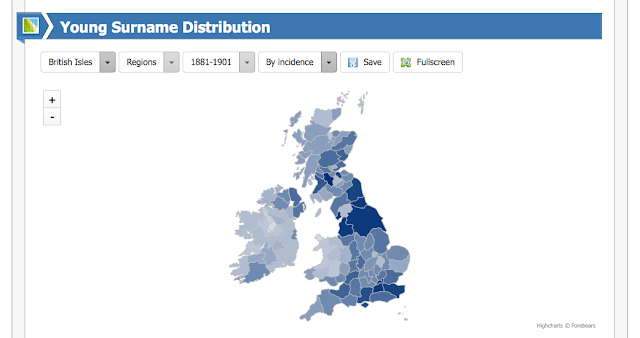 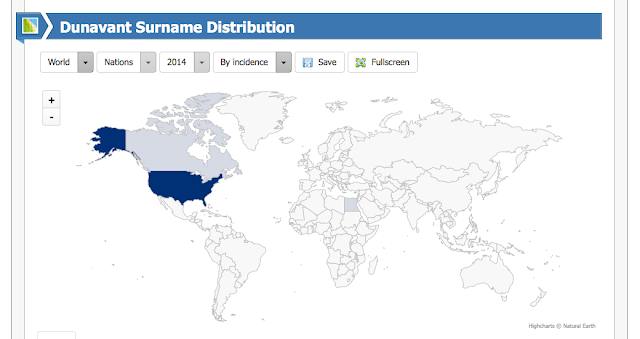 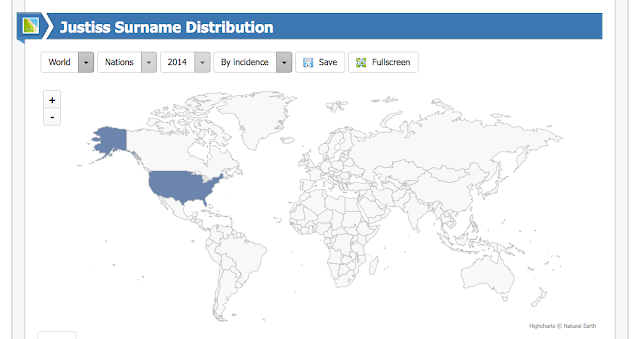 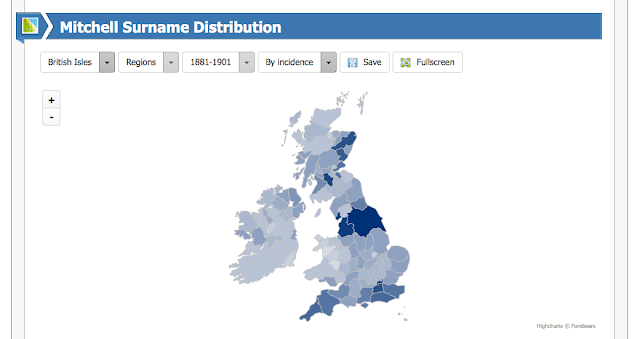 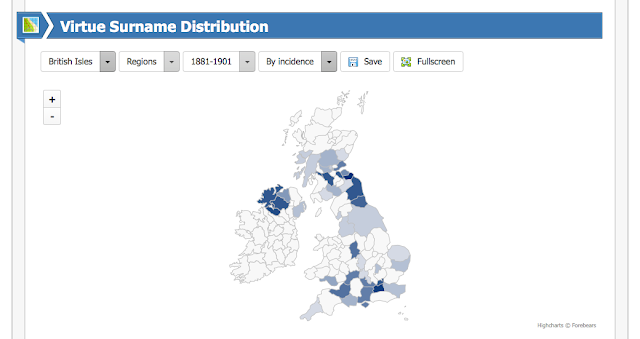 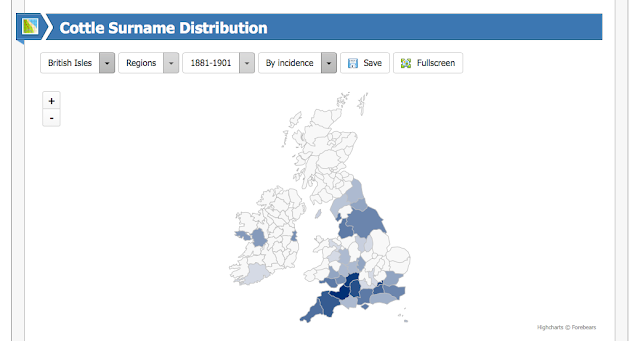 Posted by Maurice Gleeson at 08:16 No comments: