The Cheapest Way to Upgrade

Okay! The secret is just about to be let out of the bag!

Here is how to make the most of the current FTDNA special offers and save the maximum amount of money while upgrading your Y-DNA test to at least 37 markers, and even 67 or 111 markers. The trick is to do step-wise upgrading and use a different coupon code for each step! There you have it ... simples!

There are several coupon codes available:

Not everyone needs to upgrade their test. And those who don't should save their money and use it for some future DNA testing or other genealogical endeavours. But those who should upgrade include the following ...

Step 1 - upgrade from 12 to 25 markers ... This is a bit tricky and I'm not sure it will work for everyone. In brief, you will have to leave the Farrell project and then rejoin it. 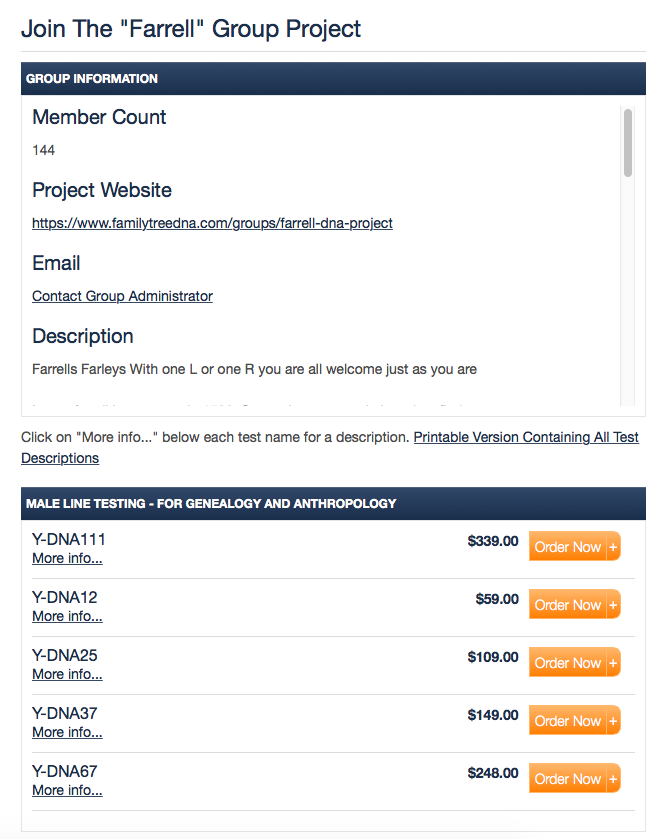 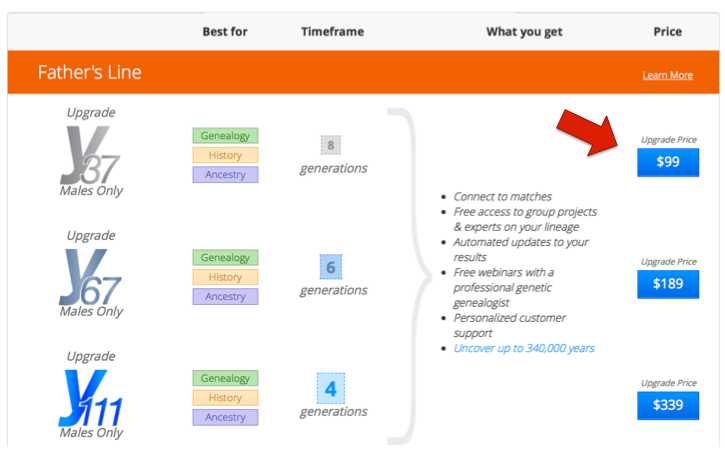 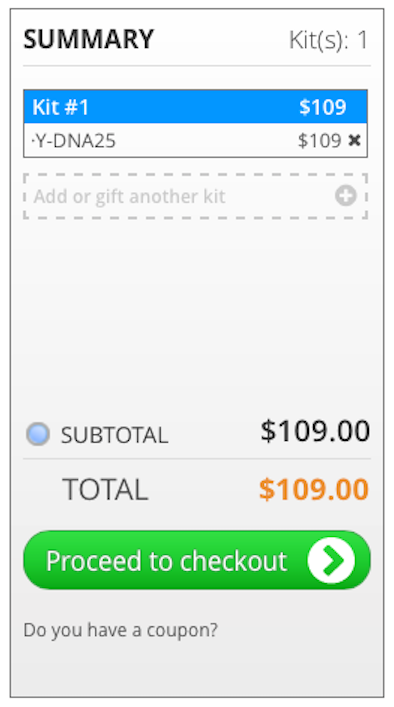 If you have any problems just leave a comment below, or in the Farrell Clan Facebook page, and I will do my best to assist.

Posted by Maurice Gleeson at 09:53 No comments:

Why are the majority of members still ungrouped?

The Great Ungrouped - who are they?

The identification of the 8 genetic clusters (among the 89 project members who have taken a Y-DNA test) has resulted in 31 project members being allocated to a specific genetic family. Members within a genetic family are highly likely to be related by a common ancestor who lived some time since the introduction of surnames and possibly a lot more recent than that, perhaps in the last 200-400 years.

However, this exercise has left 58 members as ungrouped "singletons". That's 65% ... almost two thirds of the members of the project. Is there any way that we can allocate these people to a group? Are you one of these people?

The Ungrouped category can be broken down into those who belong to Haplogroup R (52 in number) and those who don't (it was 6, but has just gone up to 7). Haplogroup R is the most common haplogroup in Western Europe accounting for between 60-90% of the population of Britain & Ireland. It is also the most difficult to organise into distinct genetic clusters so moving members out of this group will be a challenge. However, the good news is that for some members this will be easier than you might think.

Of the Ungrouped Haplogroup R members (52), 38 are Farrell variants. Of these, 15 have only tested up to 12 markers and this accounts for over 40% of the total. Interestingly, 8 of these 15 people are transfers from the National Genographic project (as indicated by an N at the start of their kit number). If these 15 people upgraded to at least the 37 marker level, there is a good chance that about half of them would be reallocated to a genetic family.

All members are encouraged to test at least 37 markers as a minimum as this may result in your allocation to one of the existing genetic families. This in turn will help you identify which members you should be collaborating with, and collaboration is the secret to success in breaking through some of the Brick Walls in your own personal research.

Two members have tested up to only 25 markers (they should upgrade to 37 markers), and the rest (21, 55%) have tested to at least the 37-marker level. For these latter people, success is a waiting game. But in time, most of them will be matched up with genetic cousins and allocated to genetic families as more people join the project or upgrade their results to the Y-DNA-37 test. Thus, this percentage of singletons will gradually decrease as more people are "paired up" with their genetic cousins.

To upgrade to the Y-DNA-37 test, simply follow the instructions on the Welcome page here - http://farrelldna.blogspot.co.uk/2015/01/welcome-to-blog.html

I took a closer look at each of the Farrell singletons in "Ungrouped R" to see if we could predict to which genetic family they might eventually be allocated. Check and see if your kit number is below.

Assessment of those singletons who have tested up to 37-markers reveals the following:

Lastly, I examined those Ungrouped R Farrell singletons with only 12 marker values and assessed to which of the existing Genetic Families they most closely matched. In many cases, these members match not one but several of the existing genetic families so it is not possible to predict to which one they might eventually belong.

Thus, the 12-marker Y-DNA test does not allow us to separate members into different genetic families and (for many) upgrading to 37 markers is the only way that such allocation will take place. As we said above, to upgrade, simply follow the instructions on the Welcome page here - http://farrelldna.blogspot.co.uk/2015/01/welcome-to-blog.html

But there is another way that we can move members out of the Ungrouped category and allocate them to a genetic family ... but I'm keeping that a secret until the next blog post!


Posted by Maurice Gleeson at 18:54 No comments:

- the rationale for allocating members to the Genetic Families of R1b

The majority of project members belong to Haplogroup R1b (25 members in genetic families, 52 members in the Ungrouped category, giving a total of 77 out of 88 members who have been Y-DNA-tested in total = 88%). This is as expected as Farrell and most variants are Western European (and more specifically Irish or British) in origin where up to 90% of the population is likely to be R1b. However, this haplogroup is also the most challenging in terms of trying to separate out its members into distinct genetic families.

For those who are interested (and for future referral), the process I employed for doing this was as follows:

The modal haplotype [1] for each of these groups was determined and the member whose haplotype was closest to the modal was used as a basis for the identification of other “close” matches, which were subsequently added to the group.

Initially, members were grouped on the basis of GD alone, with some help in borderline cases from the TiP24 score. Thereafter, other criteria (e.g. same surname variant, same MDKA, same MDKA locations) were assessed to support the allocation of each individual to a particular group. Lastly, the data was assessed for the presence of “rare” marker values and SNP data was examined to make sure that the terminal SNPs in each group were consistent with the allocation of all members to that group.

As a double-check, a Genetic Distance matrix was generated using Dean McGee’s Y-DNA Comparison Utility (FTDNA Mode) and the results were examined to ensure that the same genetic families that were generated by the methodology above were also detected by the McGee utility. The results can be viewed by clicking here (to be inserted later). No unexpected findings were revealed and the McGee’s GD Matrix supported the identification of the 8 distinct genetic families previously identified. [2]

Following this initial allocation of project members to new genetic families, singletons [4] (with at least 25 markers tested and with a Farrell surname or variant) were assessed for closeness to any of the existing genetic families above or to any particular individuals. This process revealed one final genetic family (R1b-GF5) as detailed below.

Next time ... in about 3 weeks - I'm going on vacation to Trinidad for Carnival (smiley face) ... we'll be looking at those members who remain Ungrouped and what can be done to get them out of there and into a genetic family!

[1] The modal haplotype is a fabricated haplotype. It consists of the most frequently occurring value for each individual marker among the haplotypes of the members of a given group. It can be seen in the Colorized View of the Y-DNA Results below the minimum and maximum haplotypes (indicated by MIN and MAX respectively). It is likely to be an exact match or very close match to the haplotype of the common ancestor for that particular group.

[2] To use the McGee Utility, I exported the Y-DNA results as an .xml file (click on Export to Spreadsheet), opened Excel, clicked Open File and chose the .xml file, deleted columns 2-5 so that just the kit numbers in the first column were left, followed by the marker values for each of the individual markers, then I broke the multi-copy markers out into separate columns (using the text to columns function), unchecked the markers after DYD565 (which is the last one that corresponds with FTDNA’s panel), copied the entire table (without the marker headings) and pasted it into the box indicated, & clicked Execute. You can watch it on a YouTube video by clicking here.

[4] i.e. project members who had not yet been allocated and who remained in the Ungrouped category

Posted by Maurice Gleeson at 18:04 No comments: